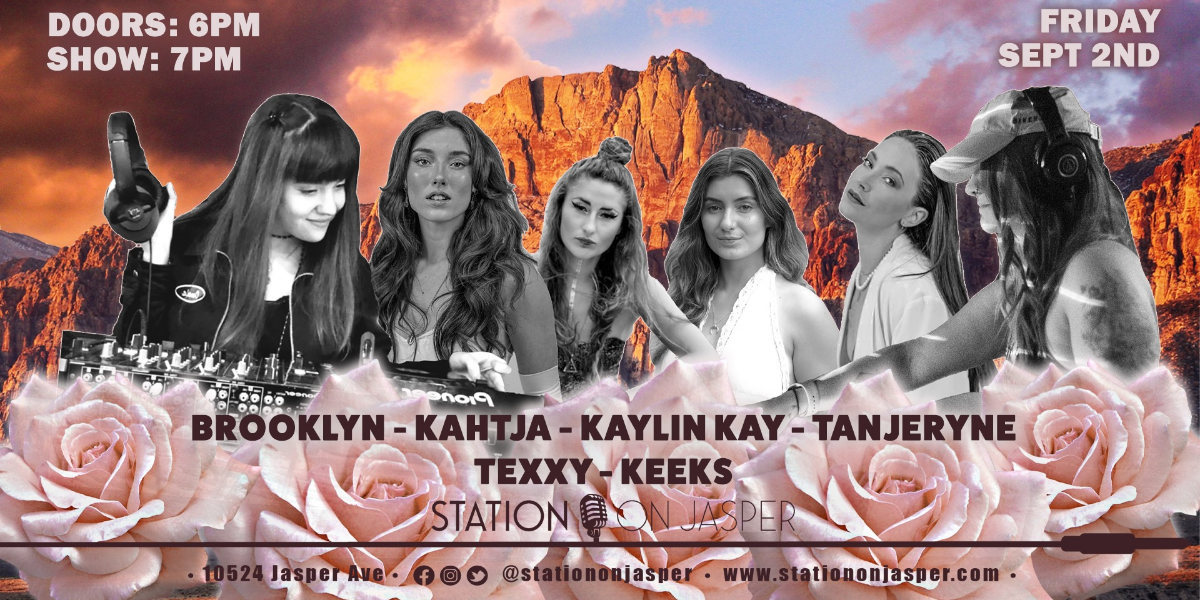 Women's Showcase! Join us at the Station on Jasper for a full evening of acoustic performances by Tanjeryne, Brooklyn, Kaylin Kay, and Kahtja followed by an epic lineup of YEG's most vibrant female DJ's TBA. Let's leave it all on the dance floor as we honour Edmonton's most exciting female performers.

Hailed as an old soul trapped in a young, classically trained body, Brooklyn Blue has been dazzling crowds with her enchanting songwriting and bewitching vocals since before she could hold a microphone. Raised in Alberta, Canada, she takes her inspiration from the prairies she grew up in and the mountains she visited every weekend. Her sound captures the golden notes of summertime pop while also flirting with the darker tones of western tinged Indie rock. Miss Blue’s songwriting unapologetically touches on the themes of sexuality, adolescence, love and is steeped in undertones of her spirituality.

Kahtja has spent a lifetime immersed in music becoming an unstoppable, multi-talented musical force. In her continued quest to hone and sculpt her authentic sound, she invokes all genres, breaking moulds and classifications, and creates a soulful & engaging experience. Throughout her journey she has been in many bands and has collaborated with a wide range of artists and producers. Kahtja is deeply passionate about creating community around music and inspiring others to share their creative gifts. Over the years she has orchestrated numerous collectives including the women’s performance collective, Goddessa. In her longtime pursuit of the therapeutic effects of music & singing, Kahtja channels her knowledge into teaching, and has a devotion to empowering others to find joy through singing & musical expression.

Kaylin Kowalyshyn is a vibrant, cultured individual, who discovered her love of music from a young age. At 3 years old, she was learning how to keep time on the drums having been taught this skill from her father, Ken Kowalyshyn. Later into her high school years she explored her skills as a drummer in a high school band called “Half Class.”A pivotal moment of her career began when she was gifted her first guitar around 13 years old which became a big part of exploring her own sound through her voice.

In 2013 she was awarded the first-place prize at the Amplify Youth Festival. Since then she has played at countless bars, coffee shops and festivals in the Edmonton area and has continually been a feature artist for Juno Award winning singer songwriter Bill Bourne. Her music has allowed her to travel throughout Alberta and BC to play for weddings and other special events. She has hosted a couple of her own jams in the city and has sold out shows at the South Edmonton Rec Room and Edmonton’s well know music venue, the Starlight.
Kaylin combines her guitar, vocals & harmonica to deliver sounds akin to folk artists like Norah Jones and Emmylou Harris. Her sound carries influences from the older generations of classic rock and folk. She repeatedly touches individuals through her stories, has been an inspiring influence in the Edmonton music scene for young artists, and continues to encourage and support the live music scene.

Tanjeryne is a local singer-songwriter and dedicated member to the artists community in Edmonton, AB. With a university background in Creative Writing & Psychology, she believes that telling stories and creating art is vital to the overall well-being of individuals and communities - playing an important role in shaping the evolution of society and culture. With hypnotic jazzy vocals, Tanjeryne hails her inspiration from strong female vocalists such as Norah Jones, Lana Del Rey, and Jewel. Having experience performing her songs, hosting open mic’s, and facilitating events, Tanjeryne loves honing her skills as a performer and a community organizer. While she is busy recording her debut full length album, “Star Dust & Lost Things,” to be released next year, you can find her 2022 single, “Your New Lady,” on all streaming platforms or shop her online store to support her artistry. Your New Lady will be supported by a release party TBA pending health restrictions. Star Dust & Lost Things will be supported by an international North American tour in 2023, marking Tanjeryne’s third live tour and first
live tour with a full band.