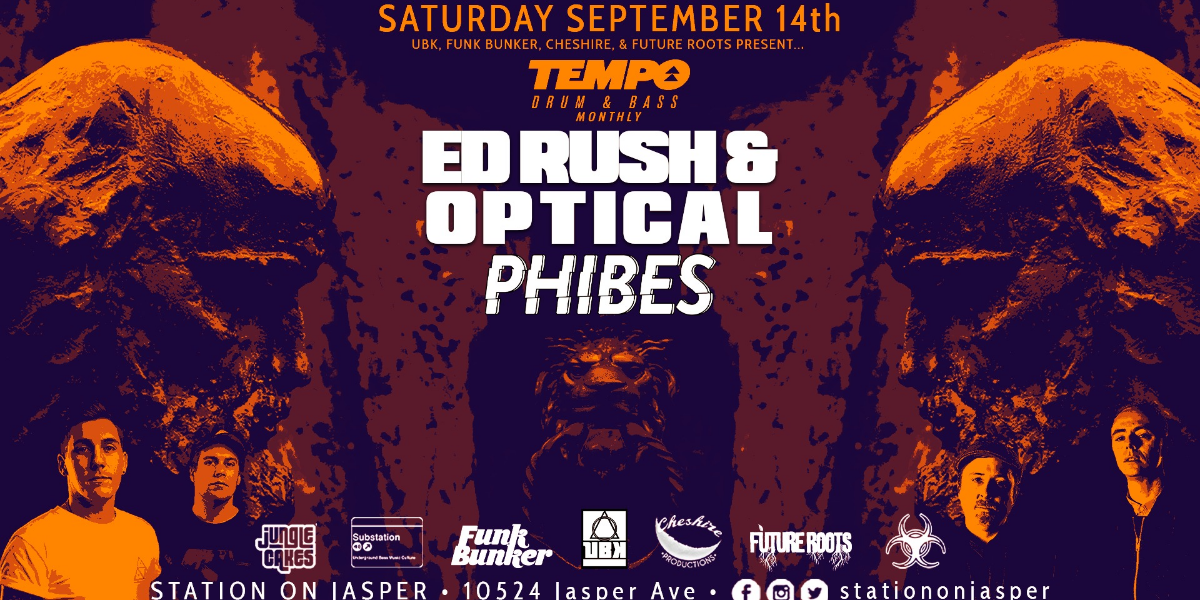 There aren’t many artists who can claim to have changed the face of a genre of music, let alone to have changed that face more than once. Ed Rush, however, is an exception to that rule. Ever since his first production outings alongside his neighbour (and infamous owner of No U Turn Records), Nico Sykes, Ed Rush has consistently proven he has the ideas and attitude to transform drum & bass and is never afraid to push that infamous envelope. Moving through the sounds of hip hop and electro in his early musical years, like many of his peers Ed Rush became fascinated with the burgeoning rave scene that was blowing up his hometown of London. The breakneck speed chopped breakbeats and piles of sub-low bass appealed greatly, and it wasn’t long before Ed Rush had convinced Nico to work on some tracks with him. The first result of their production partnership, of course, being the immense ‘Bludclot Artattack’, an out-and-out darkside jungle classic which marked a new era in hardcore, pushing the music into the realms of what we now know as drum & bass. Hooking up with another legend of the drum & bass fraternity, DJ Trace, Ed Rush began to hone his style and it wasn’t long before a fresh sound reared its ugly head. Blasting out of the Ed Rush studio setup like a breakbeat bullet, ‘The Mutant’ became another classic track and was swiftly followed by ‘Guncheck’, an instantly recognisable Ed Rush piece packed full of attitude and bashy basslines. Fully immersed in crafting a style which was to become known throughout the world as Techstep, Ed Rush’s rise to prominence was now inevitable. Releases on Grooverider’s Prototype imprint and Goldie’s Metalheadz all confirmed his place as one of the leading producers in the new school of drum & bass elite. Not only was he making great music, but he was continuing to break new ground with his ideas and production techniques; new ground which would forever change the sound of drum & bass. However, as we all know, it was Ed Rush’s team up with another great musical mind, Optical, that unleashed upon the world an album, a label and an audiological echo that would inspire thousands of copycat producers and spawn an entire generation of artists who, even a decade later, would still strive to come close to that Virus sound. Dropping their immense debut album, ‘Wormhole’, upon an unsuspecting scene, Ed Rush & Optical literally created an entirely new set of rules for succeeding in drum & bass: Take a set of tracks considered too edgy for the major players of the time, add your own label and a pinch of self determination and you end up with what is widely regarded as the best drum & bass LP of all time! Ed Rush & Optical have since moved through three more critically acclaimed albums, ‘The Creeps’, ‘Original Doctor Shade’ and the incredible semi-live project ‘Chameleon’, all with their own individual styles and personalities. 2009 saw them tackle the release of their fifth long player, ‘Travel The Galaxy’ a project which once again proved them as true masters of their trade and many claimed was their best work since wormhole. The duo are currently working on their latest album a project which promises an eagerly awaited injection of that classic Virus future funk with a blend of today’s production techniques that will prove hard to resist

PHIBES • (Jungle Cakes UK)
========================================
https://soundcloud.com/phibes
https://www.facebook.com/phibesaday
Known for their high powered electric live shows and speaker shattering production, The real life brothers duo Phibes have set the scene on fire in the last 24 months. With a huge catalouge of remixes, Originals and Album one firmly under their belt they have been touring the world in 2018, hitting over 10 countries, 20 festivals and 100+ Dates not to mention smashing sets at esteemed Festivals like Glastonbury, Boomtown, Beatherder, Shambala (CAN) and Isle Of Wight Festival. Having gained support from respected artists across the board such as Shy FX, Joyryde,Ed Solo, Holy Goof, Skepsis, Krafty Kuts, Darkzy, Benny Page, Maduk, Deekline, Freestylers and sharing the stage with numerous titans like Chase & Status, High Contrast, Ed Rush, The Prototypes, Kings Of The Rollers, Guv,DC Breaks, Fred V & Graphix, The brothers are well versed in professionally bringing a rave to its peak weather they are headlining or supprting. In the past year Phibes has recieved massive support from Youtube powerhouses Deeprot and have become a leading UK Drum & Bass artists to watch on social media, scooping up huge, positive support from their fans whenever they release. Aswell as a boast of viral remix hits on their soundcloud in Voodoo People, Paper Planes, Afterglow, Sound of Da Police and Light it up and regular Soundcloud chart topping releases, they have in less than 2 years become the go to for DJS when it comes to remixes in Drum & Bass. The lads just came back from a sucessful Festival season and a nationwide Canadian tour with a 22 Show UK Tour to kick off during freshers week. 2017 saw Phibes stand up, 2018 has seen them walking, in 2019 they`ll be no doubt running towards the top of their game.
local support tba...
DOORS: 9:00pm
SHOW: 11pm
18+ ID Required
BUY TICKETS
9:00PM - 2:00AM MST
Station On Jasper