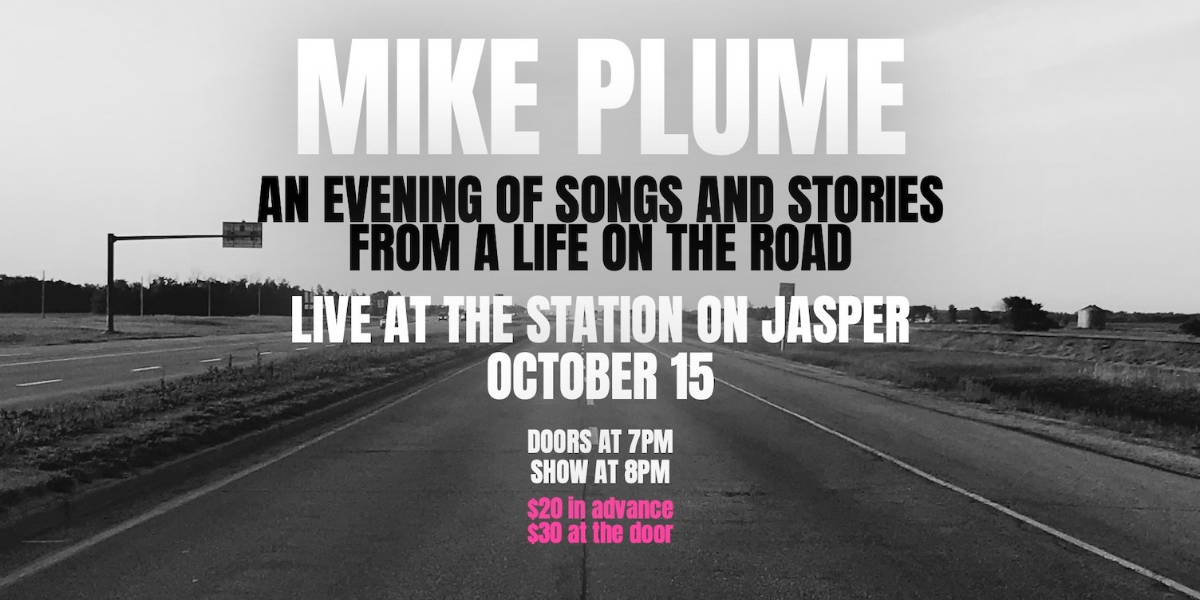 Mike Plume: An Evening of Songs & Stories from a Life on the Road

Edmonton, Alberta-based Americana artist Mike Plume’s latest single “Waiting For The Fall,” is another addition to a deep catalogue that has led Plume to be regarded as one of Canada’s pre-eminent singer/songwriters of the past 30 years. With its easy-flowing groove and poignant lyrics, “Waiting For The Fall” encapsulates those late-summer feelings we’ve all had of trying to make the good times last for as long as possible. “I love this song,” Plume says. “I feel like it's a high-water mark for me. In a perfect world, it would complete the trifecta for ‘end of summer’ songs along with ‘Boys of Summer’ and ‘Night Moves.’”

“Waiting For The Fall,” along with Plume’s 2021 single “Shreveport To L.A.,” is also the perfect companion piece to his 2020 album Lonesome Stretch Of Highway, which American Songwriter praised for being a collection of “rallying cries for turbulent times, yet given their optimism and exuberance, [Plume's songs] encourage a listener’s spirit to soar regardless.”

Americana UK also reviewed the album glowingly, writing that while it is “firmly in the country camp it never drifts into the blandness of most modern country music.” Additionally, Penguin Eggs Magazine said of Lonesome Stretch Of Highway, “Put it on and instantly get transported by [Plume’s] gravelly voice and songs. To a highway roadhouse. The sun’s going down. The evening is beginning to sound interesting. You are going to have a great night.”

Although Mike unfortunately didn’t get to mount a proper tour in support of Lonesome Stretch Of Highway due to pandemic restrictions, he did receive a notable nod earlier in 2022 when fellow Albertan Corb Lund covered Plume’s song “Big American Headliner” on his acclaimed album Songs My Friends Wrote.

Mike also kept busy when earlier this year he released The Song Harvester Vol. 1 EP, containing material written (or co-written) by Plume but recorded by artists like Luke Doucet (Whitehorse) and Jason McCoy and Clayton Bellamy (The Road Hammers). Now with the release of “Waiting For The Fall,” Mike is beginning to get back on the road, with a Canadian tour scheduled for the entire month of October 2022.

Having first arrived on the scene in the midst of the alt-country insurgency of the early 1990s, Mike Plume has logged countless miles around the globe, touring with the likes of Steve Earle, The Mavericks, John Hiatt and others, while befriending legends such as Levon Helm, Guy Clark and Stompin’ Tom Connors.

Plume has long been known for his richly detailed storytelling style and unyielding devotion to rock and roll’s  original spirit. That’s all present on his current output, powered by Plume’s earthy, uncompromising voice. That combination is proof that one of Canada’s most accomplished singer/songwriters remains at the top of his game