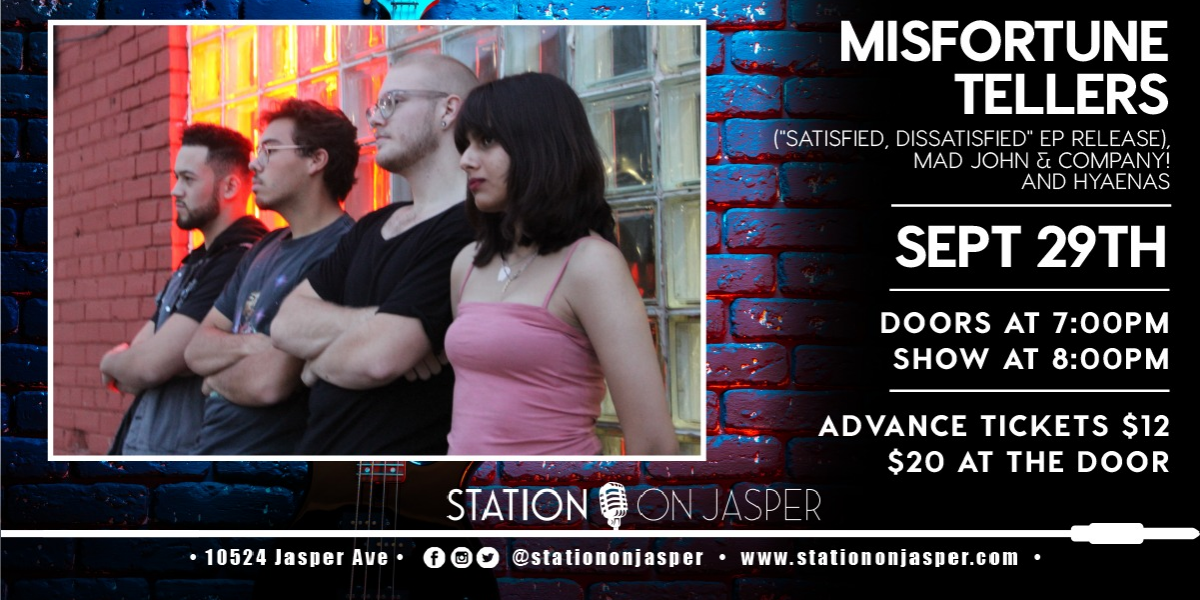 Emerging from the post-Covid music scene in Edmonton, Alberta, Misfortune Tellers are a hard-hitting four-piece Pop Punk/ Alt Rock group taking the city by storm. Blending emotionally raw lyrics and twinkly guitar riffs with shredding solos and blistering punk rock drum fills, Misfortune Tellers attack the stage with an energy and nuance that sets them apart from the rest.  With their first single “Kicked To Death In A Denny’s Parking Lot” and accompanying music video in July, Misfortune Tellers made their online debut, and with the recent release of “Terrified By My Own Design” the first single off their upcoming self produced EP “Satisfied, Dissatisfied?” the band continues to deliver emotional Pop Punk/ Alt Rock hits that are made to move you. https://youtu.be/gjA2MvilJaQ

Embodying the energy & ferocity of their animal namesake, Hyaenas is a new Indie Rock band breaking into the Canadian music scene. Their 6 track debut EP Little Trophy, produced by Elisa Pangsaeng (Yukon Blonde, Said the Whale) and Jesse Gander (The Pack AD, White Lung), is set for release in early 2023 with singles dropping throughout 2022.

From the cracks and crevices of Edmonton, crawl a mutinous gaggle of three young folk, all by the birth given name of “John”, one legal Johnathan. These mad men have merged as one to become, “Mad John!”  They carry not just their instruments in hand, nay, for they too hold the moist mission of melting the mundane mind with masterful, mystical musical tunes.
https://www.youtube.com/watch?v=-I-baWTnz8M