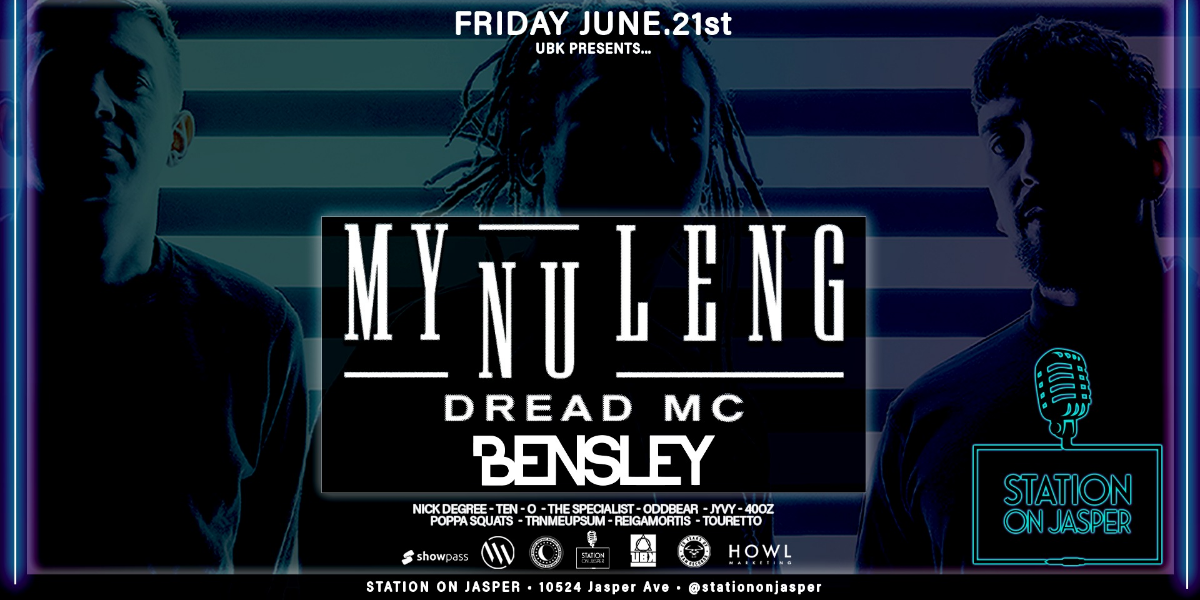 Massive releases under their belts for Black Butter and MTA Records, My Nu Leng is truly a unique one of a kind sound. Pulling influence from the spectrum of underground UK sounds you can hear - Drum and bass, Dubstep, UK garage, Grime and bass house all throughout their music.

My Nu Leng are known for their blistering sets and dark, smoldering vibe, heavy on the mood but always compulsively danceable. They have built on their tastemaker status to produce remixes for the likes of UK No.1 "La La La" by Naughty Boy, "Right Here" by Rudimental, and "Mozart's House" by Clean Bandit. With new music on the way and a packed diary of live tour dates, these are exciting times for My Nu Leng and the expansion of what are the boundaries of UK bass music along side DREAD MC.

Never before in Ram Records' 20+ year history has a story as unique and exciting as Bensley's unfolded. No previous releases. No previous DJ shows. The 19-year-old Canadian sent a demo to his favourite label in December 2013 and was signed exclusively within weeks. Embodying the spirit of "letting the music do all the talking" with an added aspirational emphasis that talent really does get spotted amidst the oceanic pools of internet creativity, Bensely's productions blew the roof off Ram's Hornchurch HQ on first listen. Digest his sounds and you'll understand just why Ram Records snapped him up so quickly. Teetering on the precipice of dark drama and majestic melody, his compositions capture the essence of everything that's exciting in drum & bass right now. Instantly resonating like you already know them, yet sounding like nothing you've heard before, Bensley productions convey a contemporary energy and dynamic that's instantly distinctive. Dig into his past and you'll understand just why Bensley creates the music he does. Influenced by his talented jazz musician grandfather, Bensley is an accomplished saxophone player who traveled throughout Ontario and won various awards as part of his school band. Just as inspired by jazz pioneers Dave Brubeck and Charlie Parker as he is by Loadstar and Wilkinson, his arrangement and chord progressions knowledge goes much deeper than a DAW interface. So it's no surprise that the first ever glimpse into his incredible capabilities was premiered on Zane Lowe's prime-time Radio1 slot, as a world "Next Hype" exclusive. The track set a precedent, and support followed suit quickly. "Fandango" received spins from Mistajam, Friction, XFM, Kiss and Capital Xtra, proving that already he'd garnered an astounding reputation for a 19-year old relatively new to the game. Quitting college in late 2013 to focus purely on the music, his debut album "Next Generation" was worked on in sonic solitude. "Next Generation" is a 10-track journey through an impressively diverse soundscape. Whether it's half-time breakdowns or the incorporation of cross genre-pollination it shows an astounding ability which will not go unrecognized. The following year saw him relive the success of Next Generation through various single releases, including "Outsider" and "Tip Toe."

Whilst channeling the same vibe as his previous productions, they also demonstrated Bensley's ever-growing musical skill set. So stay locked, because after the monumental success of his debut and continued output, there's certainly more to follow. His next sonic cut "One Last Chance" ft. Skyelle is just over the horizon, the first track in his discography to take on vocals in a way which will cement him even further into the genre's fabric.

STATION ON JASPER (no service charge): at box office