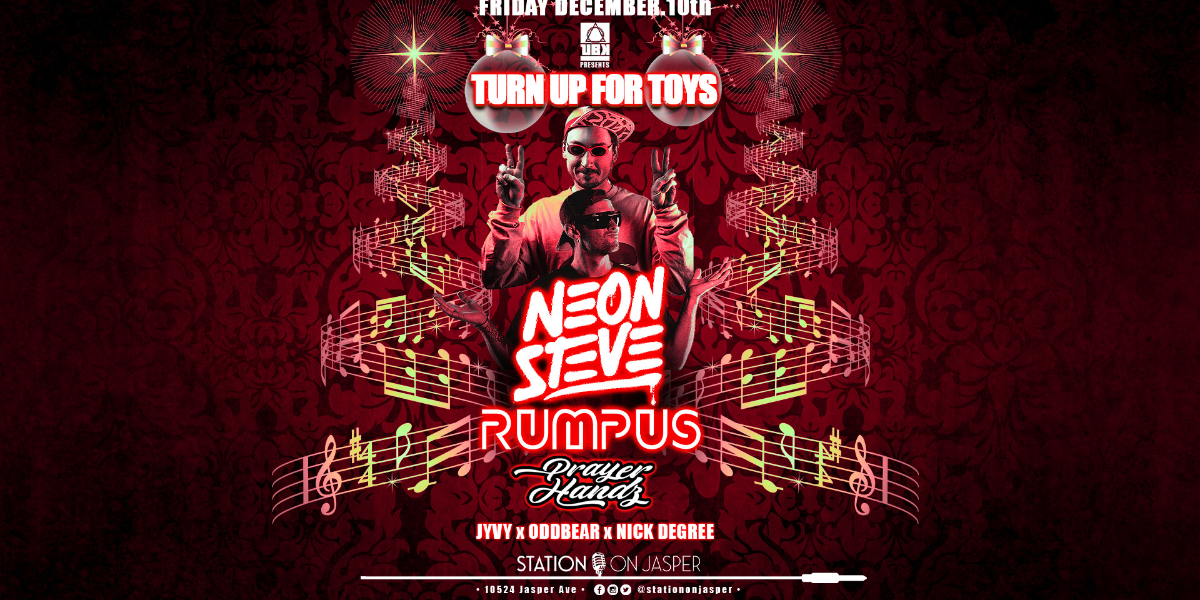 TURN UP FOR TOYS

https://www.neonsteve.comhttps://soundcloud.com/neonsteve
Canadian DJ/ Producer Steve Robertson, professionally known as Neon Steve, has curated a unique style and gained an impressive following of fans over the past decade.
In the studio by day, Steve demonstrates his unending creativity through the production of forward-thinking Bass House music. In the club by night, his DJ sets are best described as predictably unpredictable. Music is delivered in a high energy and fast paced flow through genres, with clever edits and segues throughout. Finding balance between staying true to his affinity for creating weird music, yet staying current and relatable to a broad range of fans has always been a top priority.
Between original work and remixes, his productions have earned release on taste making imprints such as: Mad Decent, Fools Gold, Confession, Punks, Psycho Disco and Cheap Thrills. He has been the top choice for features on remix EPs from some of dance music’s biggest names, including: Zeds Dead, Grandtheft, Keys N Krates, Excision and Stanton Warriors, among others.
Last year’s collaboration with Marten Horger, titled “You Don’t” gained worldwide acclaim from both fans and DJ’s alike, ultimately being signed to Tchami’s Confession Label, and featured as tune of the month in Mix Mag
As a regular on the club and festival circuit at home in Western Canada, and 9 year resident of the Fractal Forest family at Shambhala Music Festival, Steve has also played at notable fests including: Burning Man, ADE, Breakfest, BeatHerder & Envision, and played in 15 countries worldwide.
Demonstrating his wide array of musical talents and versatility, Steve’s chill mixtape series Pleasensations have become a much-anticipated fan favourite, collectively earning over a million plays.
Having spent the better part of his career dancing between genres, he has finally found the sweet spot and his focus moving forward will be predominantly House. Loaded with an arsenal of originals and collaborations lined up for release in the near future, 2019 is looking to be yet another big year for Neon Steve

Rumpus, by definition, does in fact bring the noise – and the bodies – to dancefloors and music festivals around the globe. A badass drummer with a punk-rock upbringing, Rumpus infuses that alternative edge into his own unique brand of high vibe, bass heavy, funky house music.Powered by live drums and one-of-a-kind productions, Rumpus’s eclectic style has been flexing speakers on an international scale, with recent appearances at major festivals including Shambhala, Burning Man, Lightning in a Bottle and Shipsomnia in Ibiza. His visually captivating, high-energy live shows are favourites among freaky festival folk and are even known to turn electronic music’s skeptics into fast fans.His releases include music on Insomniac Records, Club Sweat, Vibrancy, Westwood Recordings & Mixfeed, as well as recent collaborations with Volac, Smalltown DJs, Dread MC, Kid Enigma, Ill Phil and Neon Steve.A feature in DJ Mag where Rumpus was named one of “12 Emerging Acts to hear this September”, receiving the award for Sask Music 2020 Electronic Artist Of The Year, and also a nomination for the 2020 Western Canadian Music Awards ‘Dance Artist of the Year’, shows the continued acceleration for this eclectic producer, drummer and DJ and is proving this Rumpus is just getting started!

https://soundcloud.com/prayerhandz
This impassioned talent is quickly making himself a brand to watch in the electronic scene. Launching the project in 2019, Prayer quickly gained notoriety as an energetic live act appearing on national tour dates with acts such as; ILL Phil, Matroda, Dr. Fresch, Rumpus, Skiitour, and more. The live act mystique grew even more throughout Covid times as popularity rose for his weekly live stream series on twitch “Sunday Service”. Production wise, the resume features: Multiple #1 releases on Beatport (So In Love EP, Sour EP)
Releases on acclaimed labels like “Uprise Music”, Cloverdale’s “Vibrancy”, “Westwood Recordings”, “OFDM”, and more.
Industry support from; Dr. Fresch, Roger Sanchez, Don Diablo, Nostalgix, Smalltown DJs, Neon Steve, & more. With many exciting collaborations and releases lined up, watch for an exciting 2021 and beyond for this talent on the rise.


with support from the UBK DJ's• JYVY • Nick Degree • Oddbear