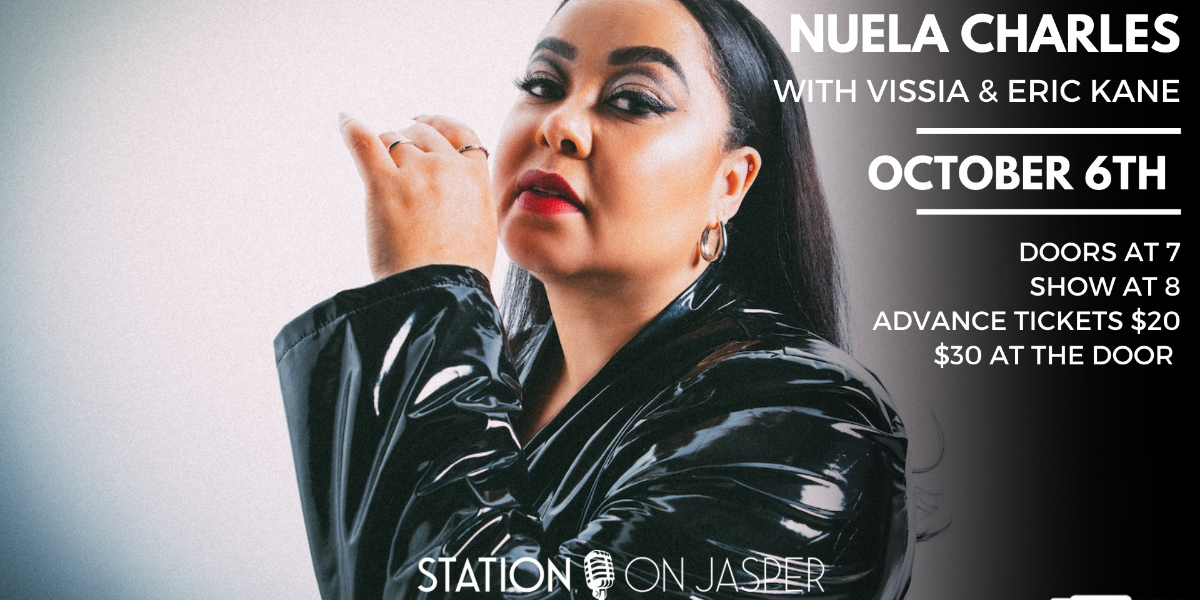 On her upcoming self-titled album, Nuela Charles shares a decidedly personal record, but one that will resonate deeply with anyone who’s struggled with the kind of toxic, private doubts that so often underly the facades we all present to others.

Nuela sums up some of those doubts succinctly on ‘Voices,’ one of three, lo-fi interludes, asking, ‘When did we stop listening to ourselves? When did everybody else’s opinion, mean more than our own?’

“Everyone wants to be loved and feel validated,” Nuela says. “If I’ve learned anything over time, particularly during the last two years, it’s that to receive that fully, you have to love yourself first – you have to look inwards before seeking outside validation.” Nowhere is that encapsulated more powerfully than on album opener, ‘Alive,’ a track that suggests the best way forward requires setting aside fears of how others perceive you and just get on with being yourself.

How that ethic has informed her life and music is something she reveals piece by piece over the course of her self-titled album; a fluid set of eminently hooky, beautifully performed, R&B-tinged, soul tracks in which listeners can find the types of affirming sentiments they can take on themselves and run with in their own lives.

“When I approach an album I want it to be a complete body of work,” the Edmonton, Alberta-based singer/songwriter says, and on Nuela Charles she wanted to telegraph the positive outcomes being kind to yourself can result in. “Everyone, especially recently, has needed affirmation.” Including herself, she adds, a way of reminding herself to: “be proud of my accomplishments, instead of letting the inside or outside voices deter me or try to convince me otherwise.”

Those voices were crowding out more positive thoughts during sessions for a full-length release Nuela was working on during 2019/2020. When Covid hit, she decided to mine that experience heavily during the writing process for her self-titled album. A process aimed squarely at working through her own uncertainties, in a way that’s inspirational for listeners. “Everyone was in this weird flux because the world shut down, and I feel like, as an artist, I wanted to create something people could go to when they needed a little boost.”

That’s abundantly clear throughout the record; especially on chill-inducing songs like ‘Heavy’ and ‘Worthy’, songs that focus on the fact that while having faith in yourself in the face of the voices that tear you down is no easy feat, if you believe that you’re ‘worthy to be somebody… somebody to be loved’ you’ll ‘get to the good part.’

Written and recorded over in 2021 this album represents a sea of change for Nuela in terms of both how she views herself and the creative process in general. Featuring deep vocal textures, spare instrumentation, and a raw, intimate feel that invites listeners in, she feels, she captures the essence of who she truly is as an artist as never before.

Nuela credits Los Angeles-based producer/mixer, Matt Parad, as critical to helping her do that. “We were talking at the beginning, about my influences. I said I really like James Bond themes,” she says, laughing. Where some people might not understand how that played into her music, Parad understood instantly. “Matt knew what I meant by that. I also listen to a lot of UK-based pop artists, who are very much, individually, uniquely, themselves. And he’s worked in that world a lot. My references weren’t foreign to him, so he was able to pull out everything that I imagined and more.”

Parad’s ability to infuse soulful R&B with modern pop sensibilities was a lock for Nuela’s signature alt. soul style; providing her with a feeling of freedom, musically and lyrically, she’s never experienced before. “He knew that I needed to write what I felt and what I was capable of doing, which was really encouraging. When I took songs to Matt he understood, not just how and where they’d fit the record, but also who I am.”

That was critical in getting her core message across; the joy of feeling free to be who you are, the importance of shutting out the voices that limit you or tear you down, and trust you’ll find a way through whatever challenges you face.

With tracks like ‘Save Me,’ that invite the listener to find the strength in themselves, through celebratory and affirming pop/funk songs like ‘Top of the World,’ to tracks like ‘Don’t Get It,’ with its Bond theme like drama and flair, Nuela’s self-titled album reads like a series of chapters in a journey of self-healing and affirmation. A journey from doubt to confidence and clarity, during which Nuela’s lo-fi, off-the-cuff sounding interludes set the stage for each stage of self-discovery.

Nowhere is that progression clearer than on the final interlude, ‘Only One You’ when Nuela sings ‘There comes a point in everyone’s life where they realize, man, I am not a kid anymore. But there’s a sense of freedom that just washes over you. When you realize that you are 100% of who you are meant to be. And that is something no one can take away from you. Ever.’”

It may be a short piece of music, but one that’s all the more powerful for its brevity; simultaneously summing up the record and leading beautifully to the final cathartic track, ‘Awakening’ as a closer.

In the end, Nuela Charles is a beautiful record, one that’s as much about her own journey as an artist as it is about the value and power of being yourself.