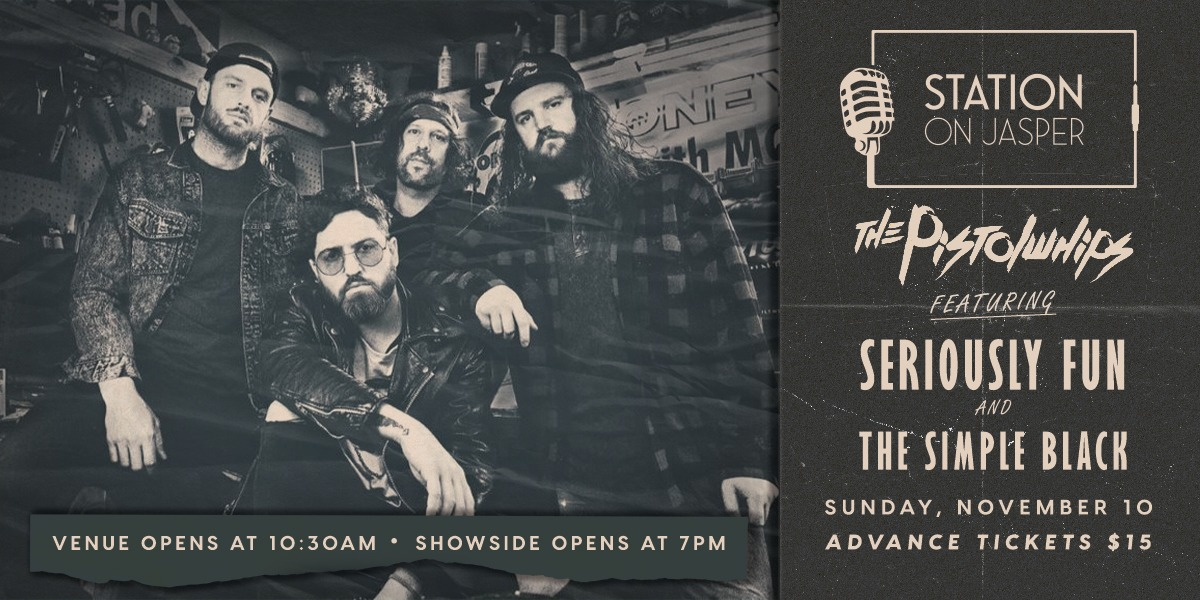 The Pistolwhips with Seriously Fun and The Simple Black

It’s all about the moment. When you step into The Pistolwhips world, the moment is all that matters. Hailing from Saskatoon, Saskatchewan, the band has worked tirelessly to bring listeners out of the daily grind and into a series of life changing moments. Blending an incredible mix of indie rock hooks, with monster rock choruses, this is a band that leaves it all on the table for you.With humble beginnings, the band quickly won Rawlco Radios 10k20 and set out to record their debut record, On Your Side. The album was released in 2014, and the band set out on a string of tour dates that included a trip to the UK, multiple cross Canada tours, and festival shows. All the hard work culminated in Planet S Magazine awarding The Pistolwhips with Album of The Year.In mid-2016 the band began work with legendary Canadian producer Eric Ratz. Eric had been the producer behind Monster Truck, Billy Talent, The Arkells, and so many other incredible artists. Through the summer of 2016, the band toiled away in Toronto between Revolution Studios, and Vespa Studios, and in the fall, released the first single off of the yet to be released album, Voices. Voices was released to radio in late 2016 and managed to land the band a spot in the top 40 of Canadian Active Rock.During this successful first single push, the song received 150,000 streams, and caught the attention of Steve Nightingale of record label Cadence / Fontana North. The band’s new album is being released through Fontana North, and is set for global release on May 26, 2017.The band will be touring across Canada from May 26 - Early July, and will also be playing several festivals, before heading to Europe in late 2017.About the new album:We live in a time where all the information that has ever existed is available at the click of a button. Before we leave the house each morning we have all seen countless images of what we should be trying to attain. The hear, the fashio, the lifestyle, the cars, the makeup, and all the celebrities, all right there in our homes each morning when we log on. All of it with a huge price tag. All of it instant, without warning, without much thought it seems. We are in the era of information pollution. The golden age of global warming. With so much in the atmosphere, how do we drown all the voices out? How do we know which ones to listen to? Which voices speak the truth?