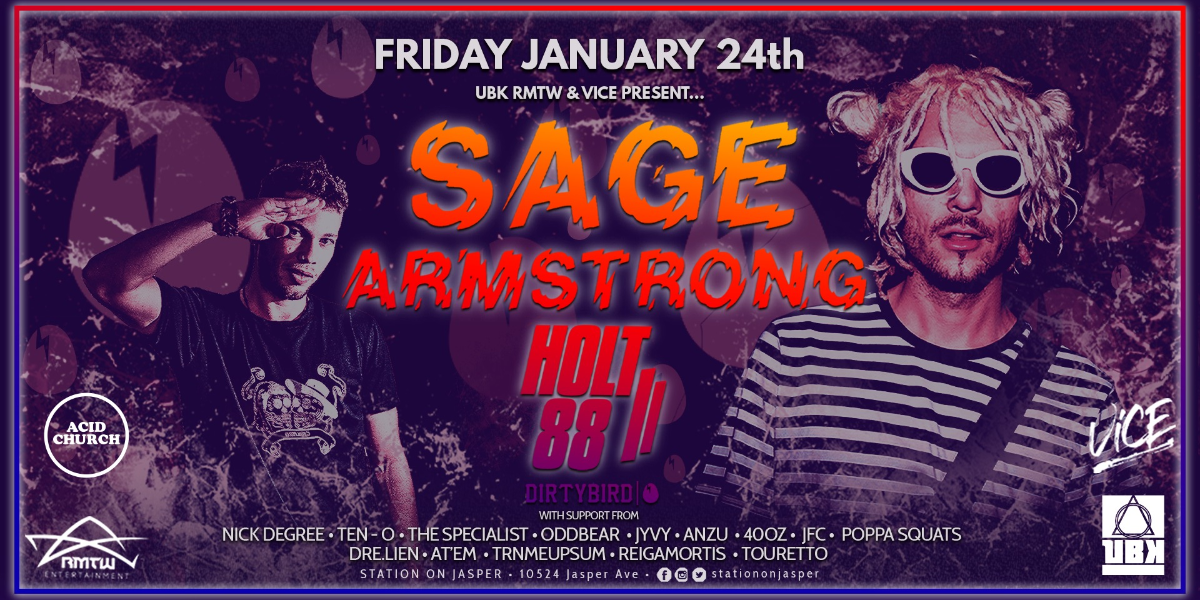 =============================
Sage Armstrong began making waves in the house music scene with his debut Dirtybird release, ‘What’s Yo Tempetcha?’. Grown in the south, he has been influenced by a multitude of different genres that continue to inspire his creative flow in the studio and on stage. He has created his own style by adding unique elements that give off a vibe of bouncy underground beats with original vocals. Sage continues making music with no creative boundaries after receiving support from some of his favorite Dirtybird artists like Justin Martin and the boss man himself, Claude VonStroke. With an exciting release schedule and show dates piling up, the future is looking bright for this rising star.

=============================
Hailing all the way from Brazil, Rafael Moraes; aka HOLT 88, has attained a remarkable status since his debut in February 2016. He has been producing music for past 15 years since he was 14 years old. Perfecting his skills over the years, HOLT 88 is one of the pioneers to utilize the 808 bass in his production. Consolidating his musical identity, HOLT 88's strong sound is recognized wherever it goes.
Today, HOLT 88 stands out by bringing different and exotic lines with quality recognized by major international labels such as DIRTYBIRD; which has several songs released and many more to come. Also, he has multiple releases on labels such as Digiment Records, Billions Label, Gangsta House, House Of Bangerz, Scuf Records, House Of Hustle, Audio Rehab, Broke Records, Perfect Driver Music, Bangerz Records, OKNF Collective, Box of Cats, Audiophile Records, Sleazy Deep, Sweets & Treats and Sirup Music.
Conquering her space in the international electronic music market, she added to her career the support of international big names like Claude Vonstroke, Green Velvet, Malaa, 4B, Ekali, Will Clarke, Chuckie, Weiss, Sage Armstrong, Treasure Fingers, 219 Boys, Marc Spence, Maximono, Dj Sneak, Beatangers, The Cool Cats, Golf Clap, Vanilla Ace, Shiba San and others. Rafael has also received support from major national artists such as Bruno Furlan, Ciszak, Rrotik, Hot Bullet and Dash Groove.

with support from the UBK DJ's