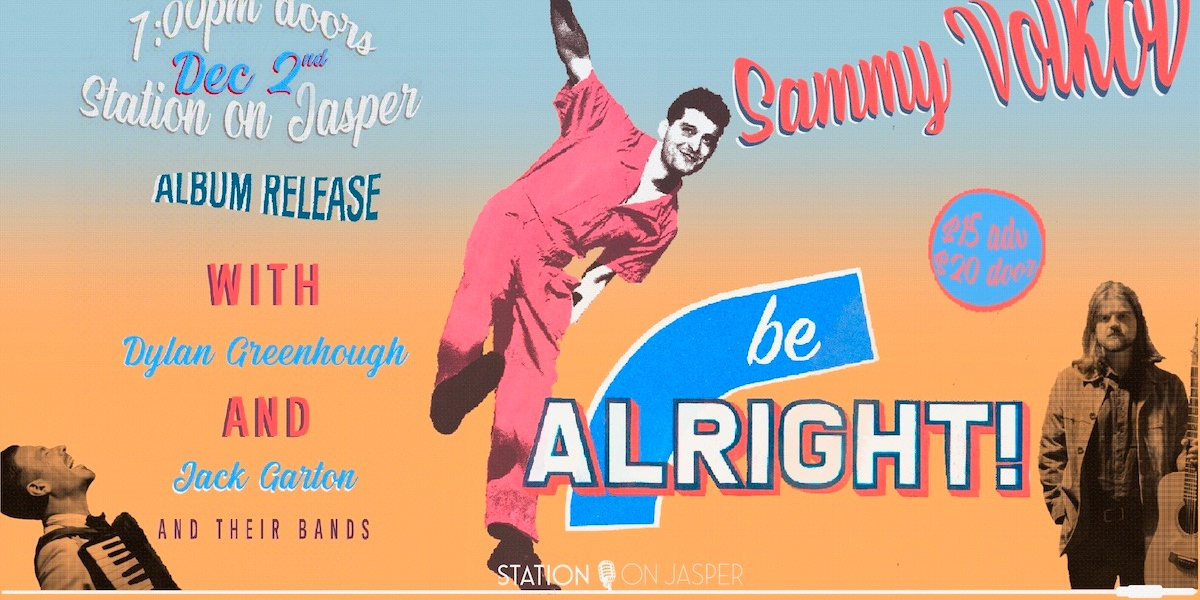 Since releasing the single “Weather Report” at the start of summer, Sammy Volkov has been turning a lot of heads with a sound that updates vintage early ‘60s pop and R&B with modern themes and sensibilities.
Based in so-called Edmonton, Alberta, Sammy’s musical approach might borrow a couple of quirks from Sinatra, a little flourish from M. Ward or Neil Young, a riff from the Shirelles, but before you know it he’s crafted something startlingly original from an esoteric palette of sonic colours. It’s all there on “Be Alright!”, an 11-song collection that combines Brill Building skill with Brian Wilson-esque ambition, all tied together by a voice as supple and entrancing as any heard in recent memory. Sammy takes music history seriously, and we get to reap the benefits. While taking his first leap into recording with a 2018 independent EP (released under the name Sam Wolfe), he went to New York City to follow his other longstanding dream of becoming an actor. Although he graduated from SUNY’s prestigious Acting BFA Conservatory, Sammy’s life in New York primarily consisted of doing behind the scenes work for many top rated television shows, and singing at open mic nights in Brooklyn.

When, one day, he came to the conclusion that he wasn’t making much creative progress, he contacted his producer Harry Gregg and engineer Scott Franchuk back at Edmonton’s Riverdale Recorders and said, “Let’s make an album.” What followed has been an emotional two-year journey, from initial recording sessions at the start of 2020, to finishing the album at the height of the pandemic, to now finally being able to share “Be Alright!”

It’s easy to simply say that if you appreciate great songwriting delivered in a classic, compelling package, then Sammy Volkov may just be your new favourite artist. But that barely does justice to the music contained on “Be Alright!” Few artists today have the vision to raise their work to the level of the 20th century’s greatest composers and performers, but that’s precisely what Sammy Volkov has done.
Prepare to be astounded.