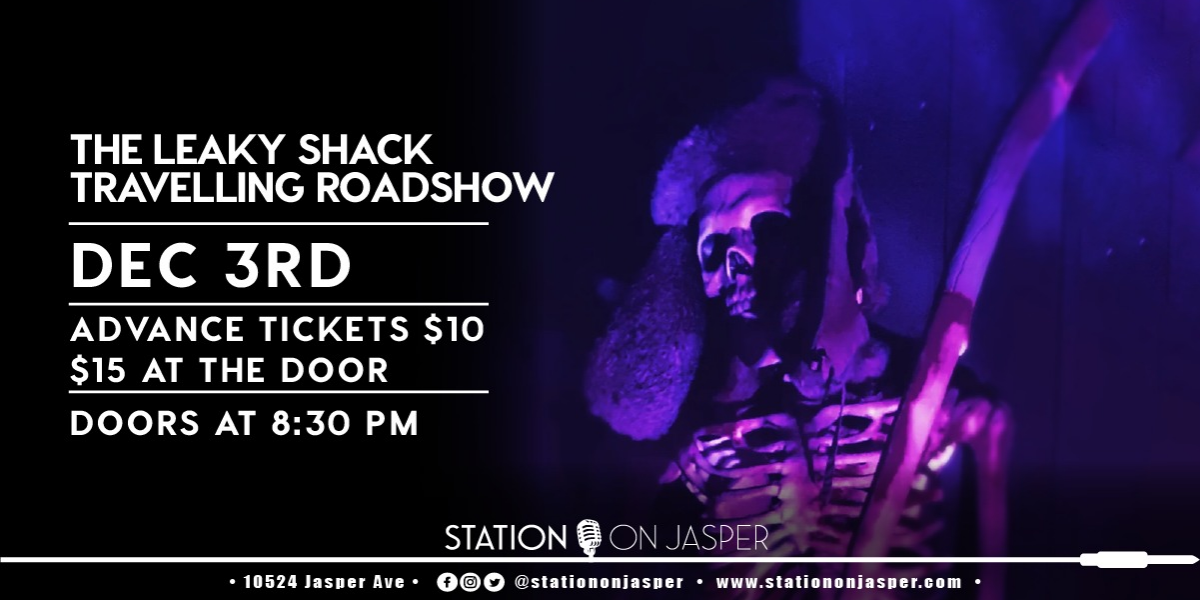 Every spring, after another cold and harsh prairie winter, the Leaky Shack floods. Though the floors eventually dry and the gear is safe for another year, there is still a funk that stays in the air. Fortunately for Stu Lennie, this funk inspired a dream of bringing together friends and fellow musicians on a journey that’s equal parts work and play. The result of Stu's dream is The Leaky Shack Travelling Road Show: an Edmonton, Alberta-based six-piece that delivers lively and wonderfully eclectic roots-rock music.

At the core of the Leaky Shack's sound is the growling baritone and driving acoustic guitar of Stu Lennie, whose original songs feature heavily in the band's repertoire. The six-piece's lineup is further rounded out by Royce Mathew on lead guitar, Heather McLeod on piano and fiddle, Mike Riley on rhythm guitar, Christian Wade on bass, and Tyler Kjorlien on drums and percussion. Mathew, McLeod and Wade also contribute harmony vocals and - as talented singer-songwriters in their own right - contribute a handful of their own compositions to the Leaky Shack’s repertoire.

Described as having a loose and fun vibe, The Leaky Shack is a melting pot of every individual’s musical influences: from folk to rock, blues to country, and indie/ alternative. Live performances feature a larger-than-life stage presence and a mix of original material and raucous takes on contemporary and classic songs that inspire them. While the Leaky Shack refuses to take itself too seriously, the band is decidedly socially- and environmentally-conscious, with lyrics covering challenging topics such as mental health, human rights causes and environmental degradation. The Leaky Shack have used their influence to raise funds and awareness for organizations such as the Edmonton Food Bank, the Multiple Sclerosis Society of Canada, and Diabetes Canada (among others), and routinely collaborate with like-minded artists and musicians in their community.

In February 2019, the band released their debut EP, Painted Thoughts, in CD form and online across all major streaming platforms. The name of the EP comes from the lyrics of the album's rolling waltz "Three Trees" , but is also a subtle nod to the Leaky Shack itself, where snippets of late night conversations over the years are lovingly scribed onto the walls. The album has received airplay on Canadian radio stations and has seen global exposure through streaming platforms.

Over the past few years, the band has been busy making their impact on the Alberta music scene: playing local bars, performing benefit concerts, music festivals, and even performing on television. While the Covid-19 pandemic has been especially challenging for musicians, the Leaky Shack has maintained an active presence through live-streamed performances, bringing the Leaky Shack experience right into viewers’ homes.