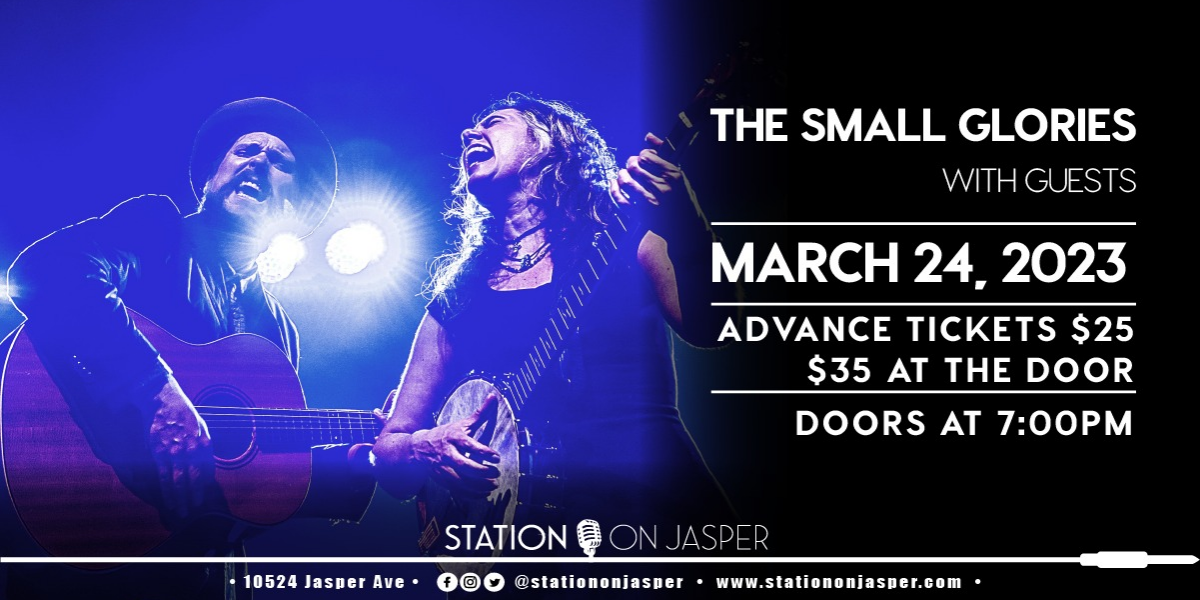 Roots powerhouse duo The Small Glories are Cara Luft & JD Edwards, a musical tour-de-force partnership planted on the Canadian Prairies. Thrown together purely by accident for an anniversary show at Winnipeg’s venerable West End Cultural Centre, The Small Glories could almost make you believe in fate.

With a stage banter striking a unique balance between slapstick and sermon, these veteran singer-songwriters have a way of making time disappear, rooms shrink, and audiences feel as though they are right there on the stage with the band. It’s not uncommon for listeners to find themselves laughing, dancing, crying, or caught up in a good ol’ fashioned sing-along. Their material is welcoming in terms of subject, folk-pop melody and instrumentation — songs of love, loss, and environment, delivered with soaring, interwoven vocals on various combinations of stomping clawhammer banjo, guitar and harmonica.

On record, Luft and Edwards take the musical synergy honed from hundreds of shows together, and expand it into a new soundscape amplified by pounding drums and other textural embellishments which only reinforce the magic of their innate chemistry — a chemistry labeled the “Lennon-McCartney syndrome,” by Americana UK, writing, “Some things just work together... to witness a performance by The Small Glories is a rare opportunity to experience that indefinable quality that creates perfection.”

Luft, one of the original members of folk trio The Wailin’ Jennys, and Edwards duplicate and reinforce each others’ many strengths and yet allow their distinct personalities to shine through, resulting in a live show that is as heartwarming as it is hilarious, as finger-picking proficient as it is relatable, and as Canadian as, well... it’s very Canadian. But that hasn’t stopped ‘em from winning over audiences from Nashville to the Australian outback. Their highly anticipated sophomore album “Assiniboine & The Red” was released on Red House Records, garnering 3 Canadian Folk Music Awards, a JUNO Award nomination, Critics' Choice for ‘Album of the Year’ in Penguin Eggs Magazine, the #1 Folk/Roots album on the national earshot! radio charts, and saw the duo win “Artist of the Year” at the International Folk Awards in New Orleans.