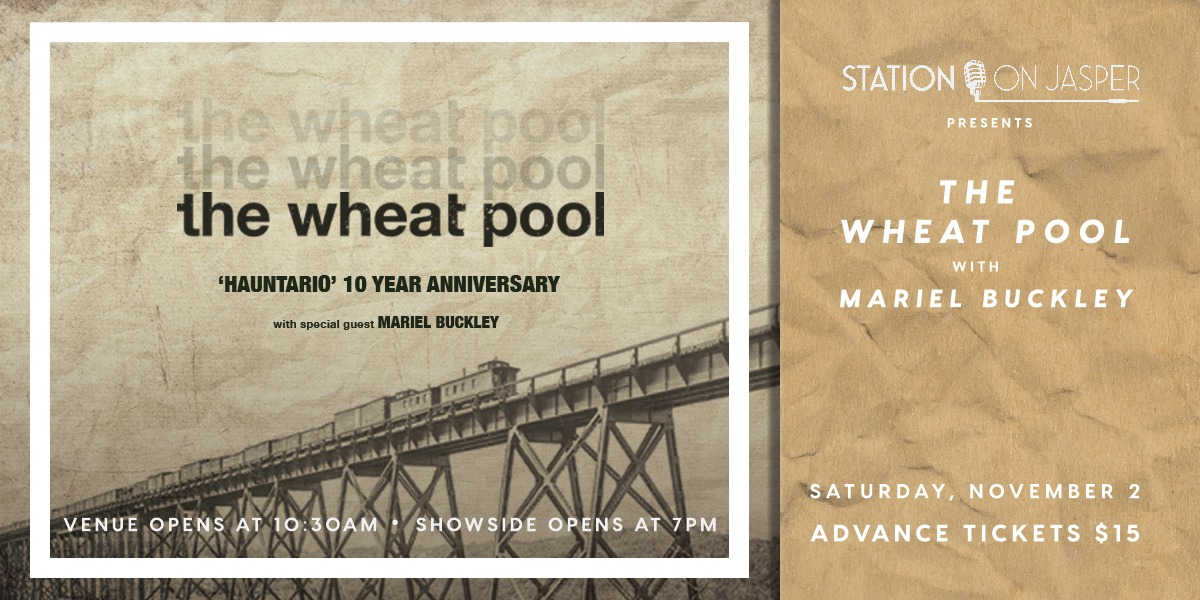 The Wheat Pool is happy to announce a hometown concert on Saturday, November 2, to celebrate the 10 year anniversary of their album Hauntario. “HAUNTAR10” will take place in Edmonton, Alberta at The Station on Jasper, and the band will be joined by Mariel Buckley to open the night of music.

The Wheat Pool, comprised of brother song-writers Robb and Mike Angus, as well as guitarist Glen Erickson and drummer Steph Dagenais, released two full length albums and an EP between 2005 and 2012, before calling it quits on their active career with a finale show in March of 2012.  Burgeoned by very loyal and active fan support, their career included multiple tours coast to coast across the country, critical acclaim in the media, awards and nominations.

“Hauntario” was their most coordinated album release; in the fall season of 2009, they embarked on multiple support tours, radio promotions, and released two supporting videos (“This Is It”, “Lefty”).  The band is excited to celebrate such a significant album to their own lives, along with the lives of many of their friends and fans locally and abroad. For all the reasons the band ceased to continue together, it was never from a lack of love for playing together and being together.

The band’s 2017 reunion show in Edmonton saw a sold out venue, with fans from Vancouver, Calgary, Detroit and Toronto, and many places in between. You can look forward to another incredible performance filled with the energy and passion of music lovers far and wide.

Mariel Buckley’s spectacular sophomore full-length album, Driving In The Dark, delivers on the promise of her previous album, Motorhome (and then some), as she plants her flag firmly as a songwriter who’s here for the long haul.

Driving In The Dark’s ten songs—led by the singles “Rose Coloured Frames” and “One Time Asking”—paint poetically plainspoken highs and lows, long nights and hard days, all filtered through Mariel’s wry, no-bullshit perspective, and enhanced by the impressive team she assembled for the recording sessions, led by producer Leeroy Stagger at his Rebeltone Ranch studio in Lethbridge, Alberta. From the moment the Calgary native arrived on the scene with her self-titled EP in 2012 Mariel quickly earned the respect of the Alberta roots music community, leading to performances in support of her idol k.d. lang, and entertaining audiences at Western Canada’s major festivals.

Having now made a powerful statement with Driving In The Dark, Mariel proves she is an artist truly coming into her own and ready to take on the world. She could have chosen to chase a slicker, more polished sound built for radio and arenas, but instead, she doubled down on the grit and the truth in her music. It’s honesty that brought her to this point, and honesty that will continue to carry her into the future.